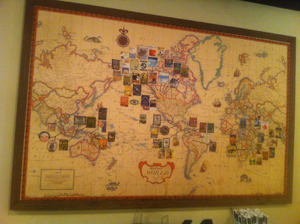 Well, today seemed like a fitting day to blog about the Alaska Airline Loyalty Program (Mileage Plan), as they’re headquartered in Seattle, and that’s where I am today.  I even managed to visit the very first Starbucks!

Although considered a major carrier, Alaska Airlines is not part of any of the three major airline alliances. They do, however, have agreements with OneWorld and SkyTeam members such as British Airways, LAN airlines, American Airlines, Air France, and Delta Air Lines (see the full list of Alaska Airlines partners here). Because Alaska Airlines isn’t part of a global alliance, its loyalty program provides opportunities to earn and redeem miles and receive perks and benefits across airlines from different alliances.

Alaska Airlines has a major presence in Seattle, Los Angeles, San Francisco, Anchorage, Portland, and, since 2007, Hawaii. With 91 routes in total, Alaska Airlines flies to various major East Coast and Midwest cities as well. It’s likely that you’ll fly through one of their major cities before being routed to your final destination.

You can check out their route map here.

Before I get into the rewards system, it’s worth mentioning that Alaska Airlines has a sister carrier, Horizon Air, that is closely integrated into Alaska Airlines’ operations. Not only do they share a number of routes, but they share the same rewards program. So regardless of which airline you fly, the perks, benefits, and rewards will be exactly the same.

Here’s where it gets complicated. Mileage Plan is partnered with a number of other airlines, with the most notable ones in America being American Airlines and Delta. You can redeem miles for a flight on Alaska Airlines, Alaska Airlines and one partner airline, or a partner airline only. You can’t mix and match partners on award tickets. This means if you fly into a destination on Delta and the return time that works for you is on American Airlines, you won’t be able to purchase the return ticket with Mileage Plan points.

Each mile you fly earns you one point on Alaska Airlines, Horizon Air, or any of their airline partners. Unlike most legacy carriers, Mileage Plan offers a 500 mile minimum for short flights. This way, if you’re only flying 100 miles (hope not though! you should just drive!), you’ll still receive 500 points for the flight. First class fares earn 1.5 points per mile and Full Flex Y class fares earn 1.25 points per mile (Fuel Flex Y Class is a fully refundable, no-change-fee ticket that gives you preferred seating as well as priority boarding).

Mileage Plan’s elite program has three tiers: MVP, MVP Gold, and MVP Gold 75k. We’ll go into a bit of detail on each.

Gold status requires 40,000miles/60 segments in a calendar year on Alaska Airlines or 50,000 miles/60 segments on the same airline partners for MVP. You’ll receive all of the MVP perks in addition to some of the following:

It’s worth noting that if you make it to a million miles, you’ll receive a Gold Level lifetime membership. There’s not that much information about it this program, but I suppose by the time you fly 1M miles with Alaska Air, you’ll have your own sources of inside information far better than mine.

All About The Mysterious Club 49

This is a special and unique program that’s exclusive for Alaska residents only. This program is a way for Alaska Airlines to show Alaskan residents their appreciation for supporting the company for the past 80 years and pay homage to the residents’ unique travel needs. Alaska Airlines offers Club 49 with the benefits of 2 free checked bags, two annual one-way certificates for 30% off of full flex fares when flying to, from or within Alaska, and exclusive weekly fare deals. To be a part of Club 49, you must be an Alaska state resident and a Mileage Plan member, and there are no costs or annual fees. If you’re a resident of Alaska and you fly on Alaska Airlines, this is a no brainer, though if you’re not living in Alaska, this probably isn’t the one perk that’s going to cause you to move there!

Miles can be redeemed on Alaska Airlines website directly for Alaska Airline tickets or on some partner airlines such as Delta and American Airlines. Most partner airlines, however, require you to redeem your points over the phone. When you do so, there’s a $15 phone fee. Elite members at the MVP Gold and above are exempt from this phone fee but are still required to pay the $25 partner fee.

When you book a flight through points, one en-route stopover is allowed in each direction. Any flights with a stopover must be booked by calling through the service center, thereby incurring the service fee.

This isn’t the only place Alaska Airlines tries to nickel and dime you. Your Mileage Plan points don’t expire as long as you earn or redeem miles every 24 months. Accounts that are inactive for two years may be closed and your miles forfeited. However, forfeited or deleted miles can be reinstated for a $75 fee for up to one year after account closure.

While understanding the value you get from miles or points from a given frequent flyer loyalty program is important, perhaps even more important is understanding whether a given airline is a right fit for your future travel needs.

For example, if you know you’ll be flying to Africa quite a bit in the near future, then Alaska Airlines probably doesn’t give you much benefit (ya think?). However, if you plan on commuting between Anchorage and San Francisco quite a bit, then this may be the perfect loyalty program for you. Stay strong, and stay loyal. Yours, the GetDebit crew.