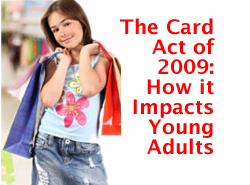 This is part two of a series of articles about prepaid debit cards and credit scoring. In this article, the author takes a look at how the Credit Card Accountability Responsibility and Disclosure Act of 2009, which went into effect in February of 2010.will impact young adults. In particular, the author discusses how the Card Act will reduce the ability of young Americans to establish and build credit histories, and how prepaid debit cards may be able to fill the need.

I recall a conversation I had with the CFO of a major midwestern university alumni association about two years ago.

He said, “Tom, we have a product here. It’s a college graduate. But we kick that product’ out into the street with hopefully a diploma and a lot of debt. Some of that debt is unavoidable, like student loans. But too much of that debt has become high-interest credit card debt. And we’re not too proud of that.”

College campuses across the country have been fertile ground for credit card marketers for decades. Conventional industry wisdom was that the first credit card you ever get will be the one you’ll hold onto the longest. And credit underwriting best practices showed that education was one of the best indicators of future wealth. So it made sense to target college students once they hit the magic age of 18, particularly those enrolled at a four-year college or university.

Thousands of table-tops hawking t-shirts and pizzas in exchange for a credit card application became the norm at college campuses every fall.

The ensuing discussions I had with the top levels of that midwestern university was how, if at all, could they control the marketing of these credit cards to students. Should they endorse it, but require passing a one-day fiscal literacy course before any student can apply? Should they ban it altogether on campus, while knowing full well that these marketers would set up their t-shirts and tabletops at student hangouts in town. How could they act responsibly and manage this problematic situation?

The problems, of course, arose from the practices of granting free money’ to young adults who had no means of repaying the debt. The cumulative carnage of these practices finally caught up to the credit card industry. Primarily because the prevailing attitude in Congress has become “if you don’t control yourselves, we’ll do it for you.”

Hence the Credit Card Accountability Responsibility and Disclosure Act of 2009, which went into effect in February of 2010. States like Tennessee had already passed legislation that put severe constraints on marketing to college students, with other states expected to follow suit.

Let’s look at both sides of what is commonly known as the CARD Act. Card issuers won’t be able to pounce on young adults any longer with offers of freebies for a credit card application. There’s a trade-off, though – young adults will see their access to credit sharply curtailed and their ability to start building credit postponed until they’re older.

Credit card issuers will be banned from issuing credit cards to anyone under 21 – unless they can show proof that they can repay the credit card loans independently or someone over 21 co-signs on the account with them. College students love, and hate the new law.

One student from Arizona State University, “Jack”, was quoted as saying he believes the law would prevent students, who do not have an income or whose parents will not co-sign, from starting to build up their credit.

Jack says one of the benefits of having a credit card as a college student is building up good credit early. “Students are going into college at 18, so they have four years to build up their credit,” he said. “By the time they graduate from college, they will have some credit for when they go out in the work force.”

But the days when jobless students could get credit cards without Mom and Dad’s approval are over.

So how does a young adult, say 18 to 24 years of age (and there are roughly 36 million of them in the U.S. today), who does not have a co-signer, enter into the economic mainstream and begin building their credit score, without that first credit card. It’s a bit of a Catch-22.

What’s the solution? The most logical answer today is with a prepaid debit card. That is a cash-based debit card that authorizes and settles in real-time and is structured so that if the cash isn’t there, the transaction simply won’t go through. Any debit card is still safer than cash, and more widely accepted than checks.

There are hundreds of different prepaid debit card programs available today. But it is important to note that all prepaid debit cards are not created equal. Some of them have amazing added-value features that provide comprehensive cash-management tools. Think of them like a checking account on steroids.

But what is missing to make this prepaid debit card product the perfect fit for these young adults who have been largely locked out of the credit card market as they begin building their credit history to serve them later in life?

The ability to take recurring monthly payments, report them to the three major credit bureaus and have it actually impact their three-bureau credit score.

And today, there are no prepaid cards in the marketplace that do that. But they are coming.

Read the Rest of This Series:

You are here: GetDebit » Debit Card News » The Impact of the New Credit CARD Act on Young Adults